By Luke on February 3, 2018 in ira-real-estate-investing, Retirement

Don’t make these Retirement Blunders that could leave you living off Ramen noodles in your senior years. 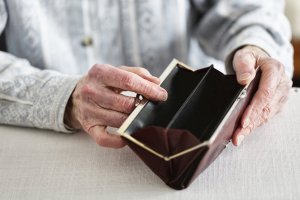 If you use all the funds in your retirement accounts too early, you’ll have to scrape by later in retirement.

Today’s 65-year-olds can expect to spend about 20 years in retirement should they quit their jobs right now. However, the Social Security Administration reports that one quarter of those who are age 65 today will reach age 90, and 10 percent will make it past age 95.

Those numbers add up to a lot of time spent living off retirement savings. If you want to be comfortable during those years, finance experts say you should avoid these 10 retirement blunders.

Blunder No. 1: Not having a plan for retirement money.

Retirement planning experts say the biggest blunder workers make is simply not having a plan for their money in retirement.

Herb White, a certified financial planner and president of Life Certain Wealth Strategies in Denver, says workers need to create a cash flow scenario. That’s a plan that looks at expected retirement income from investments, Social Security and pensions and ensures it will comfortably cover all living expenses

“Less than 30 percent of the people I’ve worked with in the last 18 years have had that [cash flow scenario],” White says.

Blunder No. 2: Forgetting about inflation when making a plan.

Another mistake people make is forgetting that a dollar today isn’t the same as a dollar 20 years from now. Inflation can erode purchasing power and needs to be calculated into a cash flow scenario or retirement plan. At the very least, retirees should make sure their investments are keeping up with the rate of inflation.

Blunder No. 3: Failing to save enough money for retirement.

Of course, the best plan in the world can’t compensate for a retirement account with scant money in it.

“A lot of people think they can’t afford to save, but you can’t afford not to save,” says T. Michelle Jones, a certified financial planner and vice president at Bryn Mawr Trust. Jones says eliminating even seemingly small expenses, like eating out, can free up cash to set aside for retirement years.

While loans can be taken from 401(k) accounts and IRA money can be withdrawn early for certain needs, like educational expenses, doing so is a mistake. That money needs to stay in those accounts to accumulate compound interest, which has the potential to add tens of thousands of dollars or more to an account balance over the course of a career.

Blunder No. 5: Getting emotional about investments.

“We live in a timing and selection culture,” says Chuck Downs, co-founder and wealth management advisor with Arven Advisors in Miami. “People buy funds based on hot recent performance.”

Then, when the market downturns, they panic and unload the stock. By jumping on hot stocks – often when prices are highest – and selling during low periods, investors seem to lock in low rates of return. Poor timing is likely one reason a 2014 study by financial research firm Dalbar found the average investor had only a 3.7 percent annual return over a 30-year period when the S&P 500 index was gaining 11.1 percent per year.

Blunder No. 6: Being too conservative in investments.

Investor returns may also lag behind benchmarks like the S&P 500 because people are too conservative with their money.

“The old advice was to use age asset allocation, so if you were age 60, you’d have 60 percent of [your money] in fixed income accounts,” Jones says. “People are living a lot longer so that rule doesn’t apply.”

Instead, even retired investors need enough growth in their funds to keep up with inflation and stretch money over what could potentially be a 30-year retirement.

Financial Engines, an independent investment advisory firm in Sunnyvale, California, estimates American workers miss out on $24 billion per year in matching funds for their 401(k)s. This is money employers would be depositing in retirement accounts if only workers made their own contributions.

“The very biggest mistake I see is that people are not taking advantage of their 401(k) plans,” Chamberlin says. “[A match] is like getting a free 50 percent return on their money.”

Blunder No. 8: Letting all retirement money be taxable.

It’s a mistake to not take advantage of retirement accounts that can ensure some of your money is tax-free later in life.

“The alternative [to taxable funds] is to put money in a Roth IRA, or ask your employer if a Roth 401(k) is available,” Chamberlin says.

Money deposited in Roth accounts is taxable, but then it grows tax-free. For those who already have all their money in a traditional IRA, the IRS allows conversions to Roth IRAs(although income taxes must be paid on the amount converted).

Medical care can be a major expense in retirement and one that is frequently overlooked.

To avoid this retirement blunder, pre-retirees should review their Medicare options carefully to decide whether a Medicare Advantage plan or original Medicare combined with a Medigap policy will provide the best benefits now and in the years to come.

Blunder No. 10: Filing for Social Security too early.

A final common blunder involves taking Social Security benefits too early. While retirees can begin benefits as early as age 62, their monthly amount will be lower than what they could receive if they waited until their full retirement age, which is 66 for those retiring this year. Waiting past your full retirement age can reap additional benefits, too.

“Many people do not realize that by delaying Social Security [for four years] after their normal retirement age, they could get 132 percent of their monthly benefit,” Jones says. That’s because the government gives retirees an extra 8 percent for every year they wait to claim benefits, up to age 70.

Married retirees can coordinate spousal benefits to maximize their Social Security. Single retirees may be able to use other sources of retirement income, such as pensions or IRAs, to delay claiming Social Security benefits.

Ryan’s testimonial: I love Luke’s course ! It has taught me so much already and it’s only been a couple months. It has opened my eyes to so many more real estate opportunities, and will continue to teach me different strategies and techniques on how to make money In real estate. Luke is an awesome coach and a great person to talk to ! I can’t wait to work with him more.  Ryan C., Tampa Bay, FL