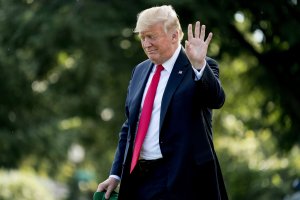 Trump signs executive order to boost retirement savings by giving Americans more time to keep their money in tax-deferred accounts and allowing small businesses to band together to offer 401(k)s.

Trump described the order as a “very bold action to lower the costs of retirement plans so that they can become an affordable option for businesses of all sizes.”

The order, which the president signed at an event in Charlotte, N.C., calls on the Treasury Department to review its rules for mandatory withdrawals from 401(k) plans and individual retirement accounts, or IRAs. The review seeks “to see if retirees could keep more money in 401(k)s and [IRAs] Accounts for longer,” the order says.

That could allow retirees to spread retirement savings over a longer period of time, according to the order.

Generally, people must start withdrawing funds from these accounts when they turn 70-and-a-half. The Treasury rules have not been updated since 2002, Daniel Kowalski, counselor to the Treasury Secretary, said on a call with reporters Thursday evening.

“The EO asks Treasury to consider whether they need to be updated,” he said.

The executive order also calls on the Labor Department to consider allowing small businesses to jointly offer 401(k) plans. Historically, the department has prevented unrelated businesses such as barbershops and car dealerships from collaborating to offer so-called open multiple employer plans because of the potential for abuse.

“They’ll band together, they’ll have such strength, they’ll be able to negotiate incredible deals because they’ll have big numbers,” Trump said at the signing.

Open multiple employer plans, which have bipartisan support in Congress, would eliminate the need for businesses to have a common interest in order to pool their retirement assets into a single 401(k). The change would cut expenses and conceivably help more firms offer savings plans.

“Basically, we will be trying to find policy ideas that will help make joining a 401k plan a more attractive proposition for small employers,” Preston Rutledge, assistant secretary of the Employee Benefits Security Administration at the Labor Department, said on the call.

The order also urges the Labor and Treasury departments to consider ways to reduce paperwork and administrative burdens that might prevent businesses from offering retirement savings plans.