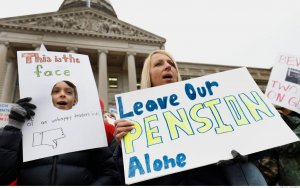 “YOUR PENSION IS UNDER ATTACK AGAIN”

Many retirees from public agencies believe their pension is completely safe and will always be the same. Your pension is “not completely sale” – your cost of living allowance (COLA) could be eliminated and other benefits could be reduced if the current California State Supreme Court upholds three anti-pension appellate court decisions. All public employees could see  pensions cuts. The governor has recently sated that he believes pension cuts are inevitable. If the Supreme Court agrees with the lower court, the new standard would be: Pensions only have to be “reasonable.”

The key points from RPEA are that, if the employees lose in the Supreme Court:

*Employers could cut pensions to “reasonable” levels (at their discretion).

*”Reasonable” would be defined by the employer.

*When budgets tighten, pensions would likely be cut first.

*Pensions could be cut indiscriminately. (Bosses might keep theirs but cut yours)

*Benefits form some might disappear but remain the same for others.

Many Pension Funds Are In Trouble

In most states, public pension funds don’t have enough money to pay for benefits they’ve promised to government workers.

The problem is getting worse. Overall, the shortfall across states grew by $295 billion between 2015 and 2016, according to a new report from The Pew Charitable Trusts.

All together, state pension plans had just $2.6 trillion to cover a cumulative liability of $4 trillion.

“Many state retirement systems are on an unsustainable course,” the report said.

Colorado, Connecticut, Illinois, Kentucky, and New Jersey have less than half of the assets needed to pay promised benefits and another 17 states have less than two-thirds.

One driver of the growing shortfall was the low investment return in 2016. The median return was 1%, while states had projected a 7.5% return.

But the gap can’t be blamed on the stock market entirely. Many states simply don’t contribute enough money. Twenty-three states still would have fallen short of what they needed even if their investment assumptions had been correct in 2016, according to the report.

There’s no one-size-fits all approach to fix the pension problem. States with well-funded plans vary in the benefits they offer, investment choices, and assumptions they use to determine how much they need to contribute.

Lawmakers in some states have changed the pension benefits they promise to future workers as a way to stem the growing liability. Despite teacher protests, Kentucky Governor Matt Bevin signed controversial legislation that changes pension benefits.

Sol Mar REI suggests keeping up with the changes of your pensions and how they may effect you and consider some financial planning with contingencies.